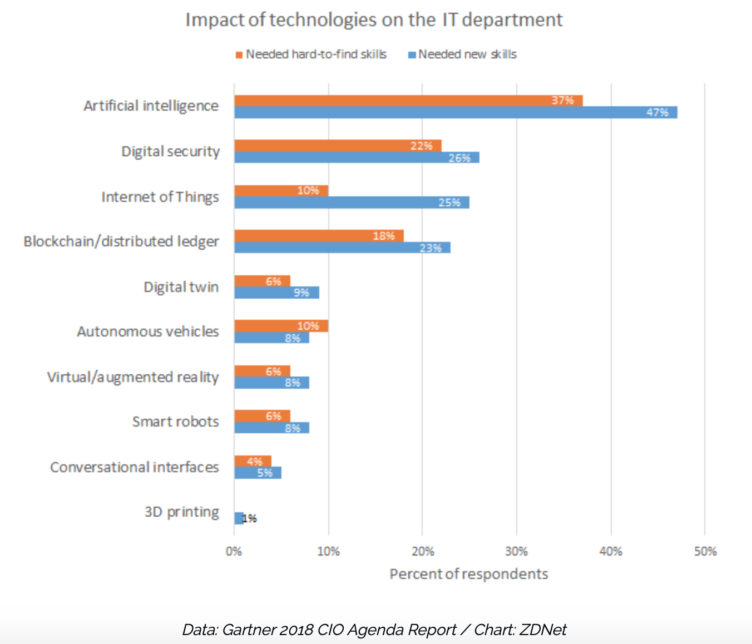 Six Facts About Tech Talent Shortage In the USA

The tech talent shortage is the plague of today’s economies affecting thousands of businesses all over the world and slowing down the evolution and mass adoption of the advanced technologies such as artificial intelligence, machine learning, data analytics, AR/VR, and others. We’ve already highlighted key facts about tech professionals deficit in the UK, Israel, and South Korea. Continuing with our series of articles that explore the reasons of tech talent shortage and how different nations address the issue nowadays, we’ve put together some facts and figures about talent shortage in the United States.

Today, the USA is the world’s indisputable leader in technology development and innovation. However, according to Werner Penk, President of Global Technology Market, “The United States is so far failing to equip the next generation with the new skills that are needed to fill large numbers of high-tech roles.” If the country leaves its STEM (science, technology, engineering, and math) talent deficit unaddressed, it’s likely to experience the greatest unrealized output worth of over $162 billion by 2030.

As of now, unemployment in the US is at its lowest rate since 2000, which leads to tech skills gap widening, as nearly 60% of employers struggle to fill their vacancies within 12 weeks.

New research from Korn Ferry Institute finds that the global talent shortage could reach over 85 million people, costing companies trillions of dollars in lost opportunity. The USA is predicted to be hit the hardest by talent deficit, which will cost the country $435.7 billion in lost revenue, or 1.5% of the whole US economy. Knowledge-intensive industries like BFIS (banking, finance, insurance, and security) require a high volume of skilled employees, and as demand outpaces supply, the competition will be ruthless.

US tech talent shortage landscape across industries and areas

“It’s developing its own flavor and attracting top tech workers using the best marketing tool ever created — the sites and attractions of the city that never sleeps,” CBRE Report 2018.

So is its talent pool. Unlike Silicon Valley, it’s not growing as quickly as it should in order to support the rapid evolution of emerging startups and mid-market companies. Even though there’s an estimated quarter-million tech workers in New York, they can’t keep up with an ever-growing number of open vacancies in tech.

Corporations like Google and Amazon drain the local talent pool as they plan to add an estimated 45,000 new tech jobs in the near future. College Factual reports that only fewer than 2,000 graduates enter the US job market each year which means that even if NYC recruits thousands of skilled specialists from outside the city, it won’t suffice to match the demand. 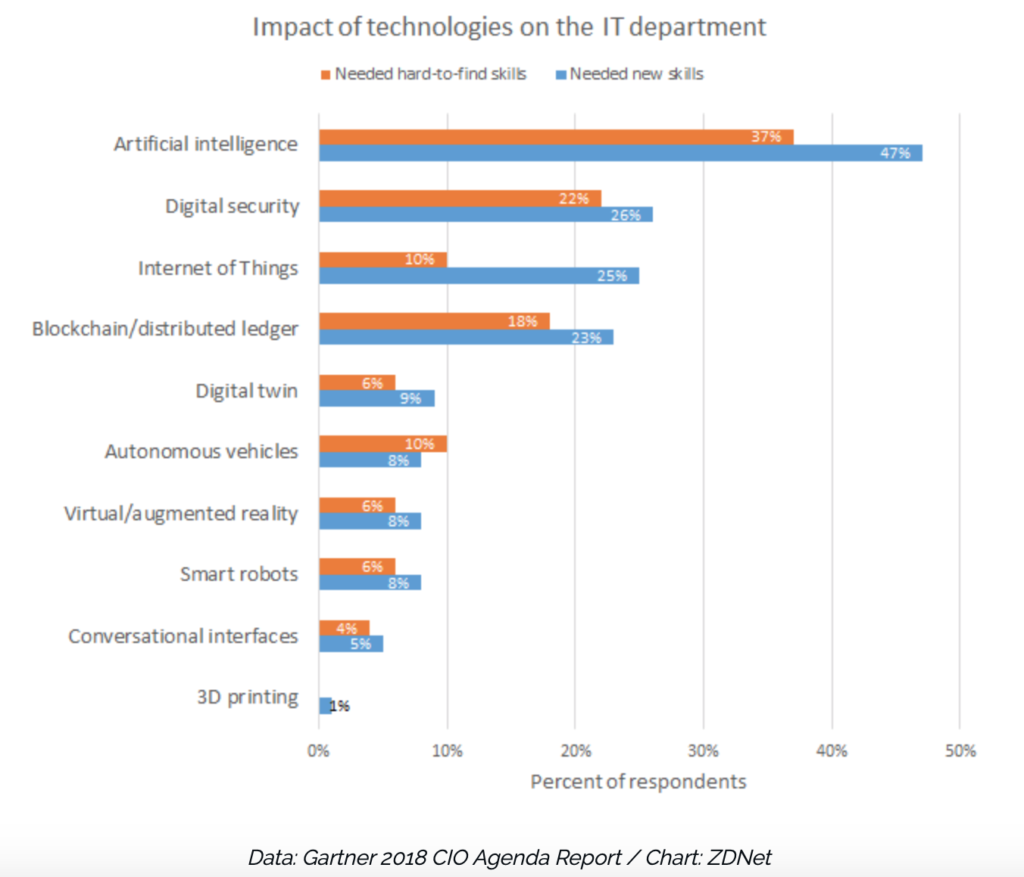 6. Compared to any other business sector and vertical, the US tech industry has the highest turnover of 13.2%. High attrition kills in-house software development teams and departments. Today, the cost of turnover ranges from 50% to 250% of each job role’s salary. For any Midwest startup, the cost of employee attrition and recruiting could exceed its seed rounds and literally kill it.

Let’s say you have a 50-person product engineering team and each employee is salaried at $70,000 annually. Your average annual cost of disengagement (CoD) will be $204,000. Given an average of 17.2% of employees are disengaged and each disengaged employee is 34% less productive, the formula used to calculate this amount is as follows:

Now let’s calculate the average annual cost of attrition and replacement (CoAR) using the following variables: the average turnover in the US tech is 13.2% and the average total cost of losing and replacing an employee is 50% to 250% of their annual wage:

The above facts explain why the US ranks 1st globally by its outsourcing volume in Ukraine. American companies have been leveraging offshore and remote talent pools for more than a decade and a surprisingly high number of the US most disruptive digital solutions are being built by Ukrainian developers in offshore R&D and dedicated development centers. Companies like Ring (home security) launch their own offices in Ukraine and tour around the country in search of top software engineering and PM resources. They go to all major tech cities and hold hackathons and job fairs where Ukrainian techies can have an interview and get a job right on the spot. IT hiring in Ukraine by US companies has reached an unprecedented level in terms of volume and creative techniques used to headhunt the best talent.

The local talent shortage is the primary reason why US companies look for talent beyond domestic pools. The second reason is obvious – the cost of talent!

As estimated by Glassdoor, the average annual base salary of a software developer in America is $83,197, while the US Labor Department estimates it at $100,080. In the very heart of Silicon Valley, the same developer will cost on average $133,010. In Ukraine, senior software developer skilled in mainstream tech (PHP, Java, .Net, C++, JS) can cost on average $42,000 per annum, including all taxes and social benefits.

In Ukraine, you can get a senior full stack developer (who can act as a team/tech lead) with an average base salary of around $65,000, while the same resource will cost you on average $110,770 in the United States.

Further, provided your Ukrainian software development partner has well-established and automated recruitment processes and methodologies, a number of trusted resource partners, and a good reputation in the local tech market, your time to hire a programmer will be reduced to just a couple of weeks and you may have a full-fledged dedicated team working on your product development project within 30 days or so. Remember that in NYC, the average time to hire a good tech specialist exceeds 3 months!

However, when you outsource your FinTech project to a lower-cost yet resource-rich country, make sure to follow these steps to avoid being trapped in the wrong engagement!

Impact of the New Laws on IT Industry

When Hiring A Dedicated Product Owner Is Crucial For Outsourcing Success