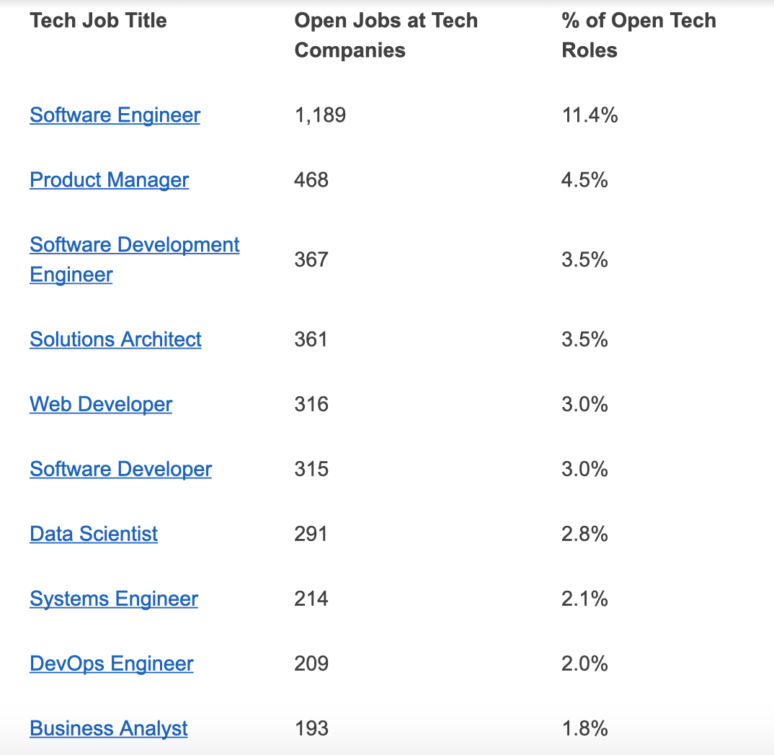 What you will learn:
1 Tech Talent Gap Can Have Serious Ramifications
1.1 By 2020, tech-related vacancies in the UK are expected to rise to one million, costing the economy an estimated £63 billion in lost GDP, annually.
1.2 The Most Common Tech Vacancies in the UK as of March 2019
2 What is the Government Doing to Tackle Skills Shortage?
2.1 Check out how Rainkine Thomson, a UK-based developer of telematics solutions and mobile reporting software, got a full-fledged dedicated software team working on its project in less than a month.
3 What Are Enterprises Doing to Tackle the Skills Shortage in the UK?
4 Is Artificial Intelligence (AI) a viable solution?
5 Nearshoring As a Way for UK-Based Firms To Gain Competitive Advantage

As enterprises across industries are digitally transformed into technology companies, the demand for top tech talent will sore across the planet. In mature economies like Japan, South Korea, the US, and countries in Western European, the skills shortage can stifle growth and have a significant impact on the local economy.

The skills crisis won’t be resolved any time soon. For example, President Trump’s immigration policies are driving foreign tech talent to Canada making it even more challenging to fill the talent gap within the US.

In the UK, employment in the tech sector has grown by approximately 15%. However, with the uncertainty surrounding Brexit and the rising cost of living will make it almost impossible to attract highly skilled workers from across Europe.

It’s safe to say that companies across the country will continue to struggle for the foreseeable future. In fact, according to the Edge Foundation, there are about 600,000 tech-related vacancies across the UK.

By 2020, tech-related vacancies in the UK are expected to rise to one million, costing the economy an estimated £63 billion in lost GDP, annually.

According to a survey of over 100 founders of tech startups in London, as much as 30% saw their growth hampered because they weren’t able to hire candidates with the right skill-sets. Worryingly, another 39% stated that people with the right work ethic and the right mindset were scarce.

To make things worse, 35% also stated that it was almost impossible to lure top tech talent away from larger enterprises that offer some of the best benefits and remuneration packages.

If we narrow our focus to all the vacant positions at tech companies today, Glassdoor suggests that over 54%, or approximately 12,200 vacancies aren’t technology-related roles. Only about 46% are technology-focused vacancies that add up to about 10,400 open jobs.

Last year, there were about 338,000 programmers and software development professionals working in the UK. At the same time, there were also 198,000 people working in supporting roles in the software and services sector.

What is the Government Doing to Tackle Skills Shortage?

While the government has taken steps to encourage the growth of apprenticeship training programs across industries, it has yet to address the widening tech skills gap. Ideally, the government needs to develop its own version of Singapore’s highly successful SkillsFuture program (which encourages citizens to take courses that will enhance their skill set).

Check out how Rainkine Thomson, a UK-based developer of telematics solutions and mobile reporting software, got a full-fledged dedicated software team working on its project in less than a month.

The government did introduce a Computer Science GCSE, but it needs to do more and increase the provision of such classes to have a broader impact. Fortunately, while the government has been slow to address this dire situation, some firms have taken it upon themselves to meet the challenge head-on.

What Are Enterprises Doing to Tackle the Skills Shortage in the UK?

As the talent shortage is affecting the technology sector the most, some companies have attempted to find solutions by launching tech-focused apprenticeship programs.

A great example of this is the leading bootcamp of the North, Manchester-based Northcoders, who are encouraging businesses in the North West to consider taking on a software developer apprentice after receiving almost ten applications for every available place on its apprenticeship scheme.

The international consultancy and training organization DevOps Group also launched their academy in the UK last year. While they are on a mission to resolve the country’s tech skills shortage, the UK desperately needs a short-term solution immediately.

While some experts suggest that AI can fill the gaps in the labor market, in reality, there aren’t enough specialist skills to develop smart technology to solve the problem. According to Tencent, there are only 300,000 AI engineers around the world, but the industry demands millions.

According to research by Deloitte, only 41% of organizations have invested in AI, but the executives surveyed didn’t believe that their leadership understood how it worked. So while AI and its related technologies can probably effectively address this problem and support the industry in the future, it’s certainly not going to happen any time soon.

In the short-term, UK firms can outsource their technology needs to established nearshore or offshore providers. Outsourcing technology functions is nothing new, and with the communication and collaboration tools available today, this can be a smooth process.

However, when you consider the time difference along with language and cultural barriers, nearshoring to Eastern Europe can prove to be a better option.

For example, tech companies can outsource projects to Ukraine where there is a large pool of software engineers and STEM graduates who have a good command of the English language. With 150 colleges and universities consistently producing graduates from STEM program, you can always count on a regular flow of top tech talent, year after year.

The former state in the Soviet Bloc boasts over 245 IT firms generating over $2 billion in revenue. British companies like Rainkine Thompson and Just Eat are already successfully working with Ukrainian outsourcing companies.

As the average UK developer commands a salary of about £1,890, you can also access quality IT skills cost-effectively. As it’s located within the continent and connected to all the major cities across Europe, visiting your nearshoring partner can be achieved at will.

While the tech talent shortage isn’t something that will be resolved anytime soon, both government agencies and the private sector can combine its resources to address the problem both in the short-term and the long-term.

Apprenticeship programs, promotion of STEM skills, and immigration policies can help in the long-term, but for now, outsourcing is probably the best bet to successfully address the shortage of tech talent in the UK.