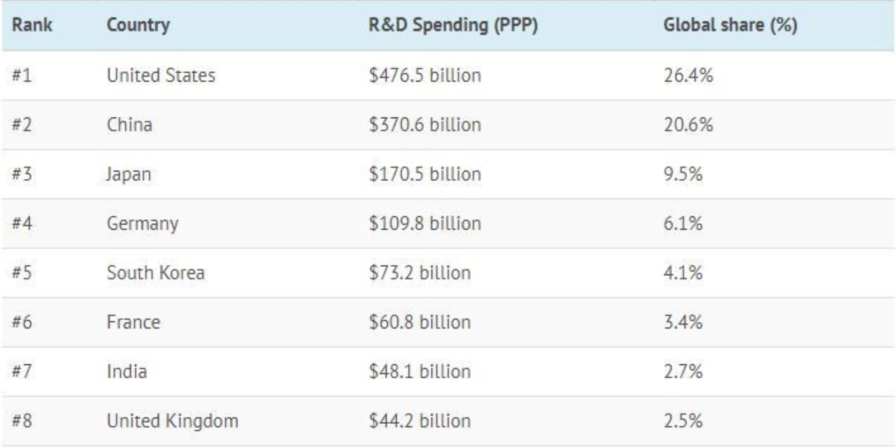 Crowd expert predicts that in the next two to three decades, the United States, India, and South Korea will be the world’s three most powerful countries. According to Bloomberg’s Global Innovation Index 2018, South Korea ranks 1st globally in categories such as R&D, Education, and Patents. The country’s macroeconomic growth is largely due to the fact that the government has for many decades focused on the development of the products and technology exports business, as well as on attracting foreign investments to the country. What distinguishes South Korea is the incredible efficiency: despite the fact that the average rational working week of an average South Korean is 40 hours a week, in practice, they work up to 10-12 hours a day.

As of 2018, South Korea ranks 5th globally by R&D spending, following the USA, China, Japan, and Germany (see image below). The country’s R&D expenditures account for $73.2 billion, i.e. 4.1% of the global market share. 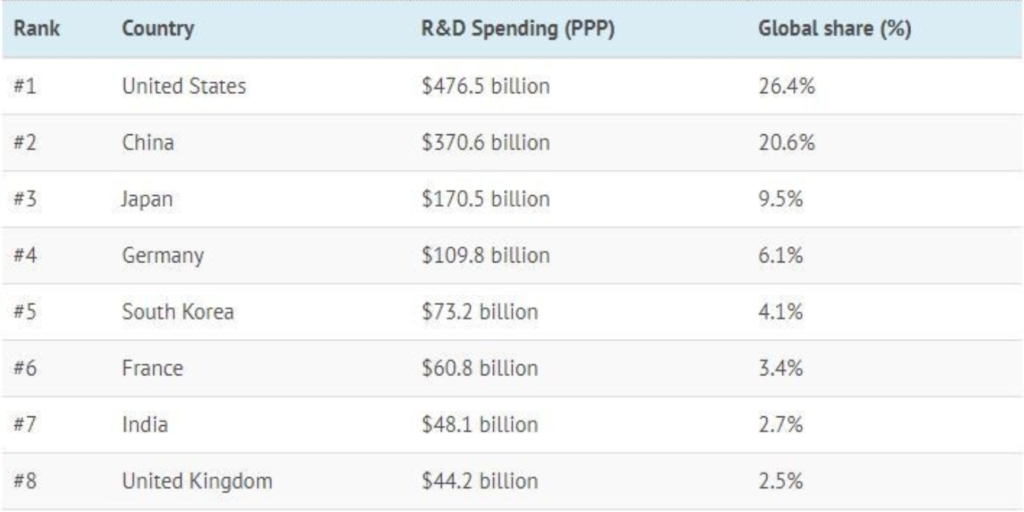 However, South Korea ranks 1st globally for R&D spending as a percentage of GDP (4.3%), followed by Israel (4.2%) and Japan (3.4%), according to the World Economic Forum. 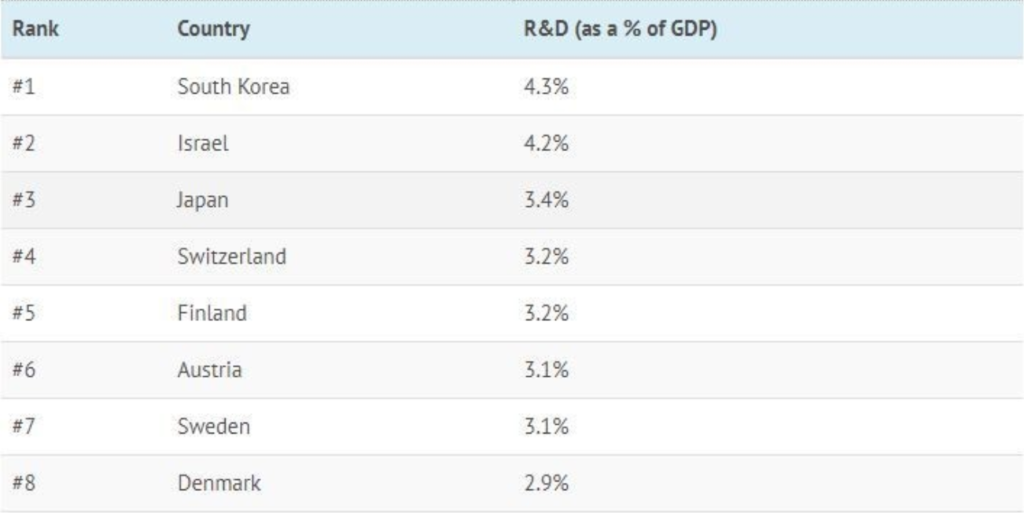 When it comes to technology development, South Korea has a very strong focus on gaining global dominance for artificial intelligence (AI) in 3 main categories: HR, technology, and infrastructure. As reported by JoongAng Ilbo, South Korea released an ambitious national plan to invest $2 billion to strengthen its AI R&D capability by 2022. The plan includes the establishment of 6 new AI Research Institutes across the country.

According to Chang Byung-gyu, Head of the Presidential Fourth Industrial Revolution Committee, “The government believes obtaining AI core technologies by joining hands with private corporations will not only achieve global standards but eventually nurture talented people and quality jobs. We aim to reach the global top four by 2022.” In addition, the country is working on enabling seamless integration of AI into robotics, bio-science, machinery, and automotive industry.

South Korea’s AI rush started back in 2016 when DeepMind’s AlphaGo defeated Korean Go Master, which shocked the entire country. Right after that, the government announced its intention to put $863 million in AI research over the next 5 years.

South Korea is making huge efforts to streamline its chips production industry with an approved budget of $1 billion for the development of AI semiconductors by 2029.

Despite the country’s heavy investments in R&D and AI, its startup scene is almost non-existent and many startups admit difficulties securing early-stage funding within the country and hiring qualified tech workforce. That’s due to the chaebol culture (family-owned conglomerates) hardwired into the minds and hearts of South Koreans.

According to an article in The Financial Times, “in a country where 100,000 graduates applied for a single entry test at Samsung, it was hard to convince talented staff to join a startup instead of a chaebol”.

According to the Global Talent 2021 Report by Willis Towers Watson, South Korea along with other mature economies like the USA, UK, Japan, and Canada will be facing a huge tech talent shortage as a result of their aging demographics.

In the past 15 years, South Korea has transitioned successfully from an industrial to a service-oriented economy, which led to the rise of the managerial, professional, and technical workforce from 15% to 22%. However, now when the world’s leading economies compete for the only most critical resource – People – South Korea doesn’t seem to be holding a leading position. For instance, the lack of qualified domestic AI talent prevents the country from building a sustainable local AI ecosystem, which can badly impede the effective implementation of the nation’s ambitious AI transformation strategy described above.

According to Forbes, the country is “focused on building AI capabilities and skills through its education system, but this will take time to reap rewards.” In response to the shortage of AI talent, South Korea plans to educate more than 5,000 high-quality AI development engineers in the years to come.

But AI isn’t the only field that badly needs the professional tech workforce. The shortage is noticeable across all areas that need technology solutions and is largely due to the fact that traditionally, South Korean programmers and software developers retire very early. A recent study conducted by the Korea Institute for Industrial Economics & Trade revealed that although software-related personnel tends to work high-intensity hours in their 20s and 30s, they often retire between 45 and 50 and end up with almost no work thereafter.

According to the study, “the software field has relatively fast technological progress. And although many companies in software-related businesses are newly formed, many also fail, leaving software personnel with shorter careers and years of service.”

These factors, combined with the fact that it’ll take a few years for a new wave of tech professionals to emerge within the country, push companies big and small to seek tech resources beyond South Korea and outsource their technology solutions nearshore (e.g. Vietnam) and offshore (e.g. Europe). Samsung’s ambitious next-gen projects can’t be completed and delivered without leveraging remote/offshore resources; therefore, the tech giant both launches own R&D and outsources some of its projects to external service providers offshore in Ukraine which is Europe’s leading destination for custom software engineering and programming.

Song Young-gil, the special envoy of South Korean President Moon Jae-in, has recently said he believes that “there’re opportunities for cooperation in technology between the Republic of Korea and Ukraine”. He also pointed out that the process of integration with the European Union is positive for Ukraine.

According to the State Statistics Service of Ukraine, the trade turnover between the two countries was $630 million in 2017. South Korean businesses invested $198.8 million in Ukraine which was less than 1 percent of all foreign direct investments. The situation can change as more South Korean businesses, especially startups and SMEs, realize the importance of tackling the issue of scarce domestic tech resources as soon as possible not to miss out on the global leadership reinforcement opportunities.

Back to South Korean companies that establish/outsource R&D to Ukraine, Samsung Electronics is the leading one. It launched its major European R&D Center in Ukraine in 2013, with more than 1,000 specialists distributed across two cities, Kyiv and Kharkiv. Its Ukraine-based R&D works primarily on AI development projects, as well as research around the computer vision including the development of software for target tracking, surveillance, identification and classification devices, and development of graphical 3D interfaces and multimedia applications.

KIA Motors is another world famous South Korean brand that successfully outsources part of its software development to Ukraine.

In 2017, the Korean National IT Promotion Agency selected Ukrainian-founded Cards Corp. out of over 1,500 companies worldwide for K-Startup Grand Challenge 2017, a governmental IT support program. Cards Corp. developed an application that helps foster the global networking culture by building dedicated online communities at co-working centers.

Ukraine’s tech talent pool counts over 185,000 specialists, and 44% are employed by outsourcing/outstaffing providers.

R&D and Big Data Analytics account for 32% of all outsourced service offerings in Ukraine.

TopCoder, the world’s largest network of designers, developers, and data scientists, put Ukraine 5th globally (between the USA and South Korea!) by their programming intensity.

In 2016, Ukraine came 11th in the HackerRank Programming Olympics, while leading the chart in the Cybersecurity category and holding the 4th position in Maths & Distributed Systems.

As our research shows, there’re many ways South Korea and Ukraine can collaborate to help each other secure dominant positions in their target areas. South Korea has very ambitious technology development and AI transformation plans but lacks resources to implement them fast and cost-effectively. Ukraine has a vast talent pool with well-developed skills in AI, ML, data science and cyber security and can help South Korean companies bridge the gap when it comes to rapid hiring and software delivery.

How to Optimize DevOps With Machine Learning