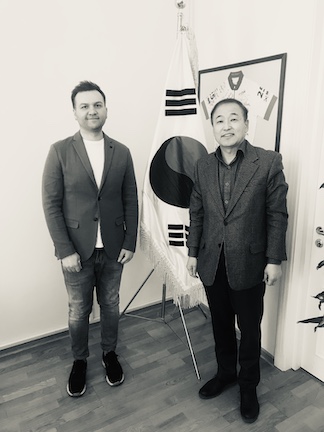 Despite being an avid traveler, I still haven’t visited South Korea (what a shame!), although my love for “the country of morning freshness” began many years ago from its cuisine. Once upon a time, I visited a Korean restaurant in Kyiv where I tried their traditional cabbage and radish snack kimchi among other delicious munchies. I literally just fell in love with this pungent, savory, and spicy food and became deeply interested in its birthplace.

What usually comes in mind when we, foreigners, hear the words South Korea? The economic miracle of the 1960s, unsurpassed quality of goods and produce, the rapid evolution of the advanced technologies, well-developed fashion industry and plastic surgery, Samsung, LG, Hyundai, KIA and Daewoo, K-Pop and PSY’s “Gangnam Style” as well as an isolated stern neighbor in the North. However, South Korea is one of the world’s strongest and most successful economies that ranks 13th globally by GDP ($1.4 trillion, according to the World Bank), has a very low unemployment rate (3.7%) and inflation (1.9%), and FDI inflow of over $17 billion per annum.

What kind of relationship does Korea have with my country? How interesting are the Ukrainian IT industry and resources to Korean companies? What joint projects are already underway and what projects have been planned for the future?

It seemed to me that there were not enough articles and reports in the media so I interviewed and asked my most burning questions to the Ambassador Extraordinary and Plenipotentiary of the Republic of Korea to Ukraine H.E. Mr. Lee Yang Goo with whom I had an audience last week.

Mr. Lee, how would you rate today’s economic relationship between Ukraine and the Republic of Korea on a 5-point?

Two years ago, in one of your interviews you said that Ukraine and South Korea had chosen 10 pilot projects to collaborate on jointly. Was any of those projects executed? Has any progress been achieved in this regard?

With Mr. Lee Yang Goo, the Ambassador of the Republic of Korea to Ukraine

First of all, it’s the construction of a new grain terminal in the port of Mykolaiv in which Korean company Posco Daewoo takes an active part. Earlier this year, Posco Daewoo has purchased 75% of the terminal share, which is a very positive signal for other businesses in South Korea. In fact, it’s already helped bring some Korean farm machinery manufacturers to Ukraine.

Yet, today’s most prospective area of cooperation between our countries is smart farming. Ukraine has a very strong tech industry, good AgTech expertise as well as the unparalleled and robust greenhouse complex that South Korea can take advantage of.

South Korean companies are interested to participate in Ukraine’s smart city and infrastructure development projects. One of such would-be projects is the conversion of Trukhaniv island in Kyiv into an eco-friendly innovation park with R&D labs and residential real estate. But that’s just an idea for now.

Another prospective area of cooperation between our countries is drones. Many Korean drone makers see Ukraine as a resource-rich destination for drone manufacturing outsourcing. Besides this, joint projects in fields such as software development and IT, healthcare, biomedicine, and R&D gain traction slowly yet confidently. South Korean biopharma companies have agreements with Ukrainian medical institutions and labs, with most of the efforts going towards cancer treatment research.

When it comes to software development partnerships, South Korea views Ukraine as a great place for the outsourced blockchain development. Dasan Networks, a large Korean IT Group comprised of several technology companies is going to enter the Ukrainian IT market shortly (they’re busy opening their first office in Kyiv now). The Group’s President has already visited your country and admitted its great technological potential and the quality of your software engineering talent.

Startups create another area for collaboration between our countries. Lviv city administration has recently hosted a South Korean delegation that is extremely interested in establishing long-term collaboration with the Lviv Polytechnical University School of Startups.

Speaking about startups, how exactly is Ukraine attractive for South Korean businesses?

First of all, that’s innovative ideas and solutions your country is rich in. There’re some very promising Ukrainian startups and South Korea is interested in developing and making them highly competitive on the international scene.

Today, the Republic of Korea is competing with Israel, USA and China for the AI and data analytics leadership. However, many companies in these countries admit that the only biggest impediment that prevents them from scaling fast is the lack of domestic tech talent. Does South Korea have this issue, too?

Sure thing. Finding qualified programmers in Korea has always been tough. Our youth isn’t very enthusiastic about making a career in IT, while the demand for such specialists grows from year to year. The President of Dasan Networks has also pointed to the lack of onshore tech resources among the key reasons why they came to source talent from Ukraine.

Good specialists are always in deficit so Korea welcomes skilled migrants just like any other country. To date, about 2 million qualified foreigners have work permits in South Korea. The more competent you are, the higher the chance you’ll get a job in Korea.

How important is it for Ukrainian and foreign specialists who want to work in South Korea to learn Korean?

If that’s IT, fluent English will be sufficient for communication, so there’s no need to learn Korean.

Speaking about the lack of domestic resources, how does South Korean education help bridge the skills gap?

The government makes many different efforts to increase the attractiveness of IT jobs for youngsters. The initiatives include subsidies and special scholarships as well as enhanced collaborations between businesses and universities and R&D labs. Universities are extremely important as it’s actually them that will supply a new generation of tech specialists who’ll ensure better cooperation between our countries in the near future.

I’ve read that in South Korea chaebols (i.e. huge oligarch-owned corporations) drain the local talent pool by offering people better stability and salaries than startups that struggle to hire good resources as a result of this. In your opinion, do chaebols harm the Korean startups ecosystem?

Well, yes, they’re more attractive than startups, but, however, I think they help rather than do harm. As a matter of fact, corporate social responsibility (CSR) is very important for Korean businesses. Within their CSR initiatives, many chaebols allocate significant budgets to mentor startups and develop entrepreneurship. They invest in certain startups or back them up by providing access to infrastructures and R&D resources, collaborate with universities, hold tech contests and hackathons, and so on. Startups that win those contests get privileges and attract funding, while best achieving students get scholarships and opportunities to work in large technology houses like Samsung or LG.

To cut it short, chaebols support startups and entrepreneurs directly and indirectly. It helps them improve their corporate images both within and outside of Korea. Even the fact that South Korean companies run R&D overseas and support global software developer communities helps them gain a better reputation within our country.

Mr. Lee, you’ve been working with Ukrainians for quite a while. Based on your own experience, how comfortable is it for Koreans to work with Ukrainians from the work ethic perspective? Is there a huge cultural and mentality difference between our nations?

There’s really not much difference. It’s not just my opinion, I’ve heard the same from other Koreans. As colleagues, Ukrainians are very loyal and reliable. Many Korean companies are very dynamic, they have pretty tough work schedules, they work overtime and at the weekends. Ukrainian partners never have issues with this and are ready to keep up with our work tempo, which is good!

The Ukrainian government has determined 2 most revenue generating and prospective industries which are IT and agriculture. Do you think they should get tax holidays to attract more foreign investments and become more competitive on a global scale?

This might make sense. Speaking about smart farming, tax holidays could be a good stimulus for Korean AgTech and biotech companies to come and do business in Ukraine. That would be a win-win for both countries.

Is there a chance we’ll ever have a free trade agreement with the Republic of Korea?

Not any time soon. For us to have a free trade agreement we should have a substantial trade volume between our countries. Today, our trade volume is around $800 million and it used to be 3 times higher in the past. By the way, there was an attempt to sign such an agreement 15 years ago, but then the trade volume dropped and the initiative receded into the background.

Yet, considering current projects and collaborations of the past years, the trade and investment volumes between our countries are expected to grow.

Mr. Lee, let’s say a Ukrainian IT company wants to find a business partner within South Korea. What would be the best strategy to get them on board? Will email marketing work or should they better pitch and approach Korean companies through local business associations and agents? Is there any secret sauce of how to partner with a Korean company?

You need to mobilize all of your efforts and use the omni-channel approach including email campaigns, networking events, etc. You need to continuously generate demand to attract Korean partners.

And my last question is about Ukrainian cuisine. Do you like it and if yes – what’s your favorite food here?

Ukrainian cuisine is very diverse just like Ukraine itself. I like borsch, but I mostly eat Korean dishes, to be honest. By the way, borsch is very similar to one national Korean soup! We also have very delicious noodles!

By the way, the day before yesterday we hosted a South Korean delegation within one NGO initiative where we discussed the village development in Chornobyl region. And we came up with some interesting ideas. Kimchi is one of them. We might set up the kimchi production line in Ukraine where we’d deliver the recipe and seasoning and your side would handle production and exports. This could become another prospective joint project for our countries.

This ended our conversation with Mr. Lee and I left the cozy Korean Embassy wishing the relationships between our countries would become closer and more fruitful, the trade turnover would increase, and all the planned projects would be implemented in the most successful way so that more Koreans would love our borsch, and Ukrainians – kimchi!

How to Identify and Manage Risks at Software Project Planning Stage

How to Outsource FinTech Software Development the Right Way