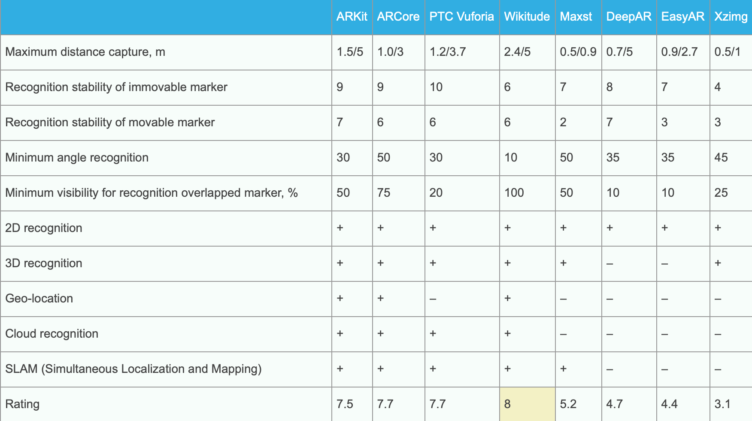 AR SDK is a software engine that ensures the functionality of the augmented reality (AR) technology and actually makes your AR applications work as expected. The role of AR SDK is to perform the most difficult task of combining your digital content and the real world. It is the SDK that ultimately lays the foundation for your AR application’s capabilities, so it is very important to choose the right platform from the very beginning, according to the most sophisticated requirements of your AR project development.

Below is a list of 8 popular SDKs for building high-quality augmented reality applications.

The best iOS apps built with ARKit include, but aren’t limited to:

ARCore is Google’s platform for building unparalleled AR experiences. Using different APIs, ARCore enables your device to sense its environment, understand the world and interact with data at your fingertips. Some of the APIs are available across Android and iOS to enable shared AR experiences.

ARCore uses 3 key capabilities to integrate virtual content with the real world as seen through your phone’s camera:

Examples of some of the best ARCore apps include:

Looking to build an enterprise AR solution? Vuforia is one of the most preferable tools among VR/AR/XR app developers (the current user base exceeds 500K developers worldwide). Vuforia features a drag-and-drop interface that significantly facilitates the processes of AR development and rendering.

Examples of the groundbreaking apps built with Vuforia include:

As the world’s leading indie tech provider, Wikitude features a global AR development ecosystem spread across more than 180 countries and comprised of over 125,000 AR developers and featuring more than 25,000 apps.

Examples of successful apps built with Maxst are:

This SDK has a great team behind: former NASA software engineers and 3D modellers and developers from Candy Crush and Hailo apps. It comes with 4 effect types: rigid objects, deformable masks, morph masks, and post processing effects, and is a perfect fit for developers looking to add the highest quality, mobile-optimized, Snapchat and Facebook style 3D and realistic face lenses, masks and special FX to iOS, Android, HTML5 and Unity applications.

Brands like Armani, Sephora, and Ray Ban leverage the power of AR by using DeepAR SDK. Check use cases on their website.

Pricing: Free trial version for non-commercial use/2200 Euro for unlimited number of apps.

We’ve put together the comparison table that compares and contrasts these 8 AR SDKs in terms of available features and their robustness.

As our analysis shows, Wikitude is an indisputable leader followed by ARCore and Vuforia. While the availability of AR SDKs and platforms is a positive trend that will help drive up AR/VR/XR mass adoption and traction, it’s impossible to create unsurpassed AR experiences without involving human AR developers.

However, the shortage of AR dev talent is already pretty huge globally and, according to expert forecasts, it’s only going to be harder to hire high-quality AR developers. The reasons are pretty obvious:

If hiring AR dev talent internally/onshore is a big bump in the road for your AR project development, as it’s time-consuming and expensive, why not look beyond your home country for remote/offshore talent.

There’re traditional hotspots for VR/AR talent like, for instance, Ukraine that has a vast tech talent pool (for all mainstream and rare technologies and skills) and offer foreign clients the benefit of cost arbitrage. Ukraine is home to such AR-driven startups as Looksery (image processing) that was acquired by Snapchat for $150 million in 2015.

Less than a year ago, another Ukraine-based AR startup 3D Look raised $1 million in funds to enable body measurements with a smartphone.

According to the latest reports, in Ukraine, more than 20,000 AR/VR developers (including 3D, Unity, Unreal developers, etc) are currently employed by the gaming industry alone, with the overall pool being assessed at over 185,000 specialists as of the end of 2018.

Tags: Career in IT

How To Protect Sensitive Data When You Outsource