Get in touch
8allocate/Blog/Through the Thorns to the Stars: Israeli Startups Ecosystem 2019 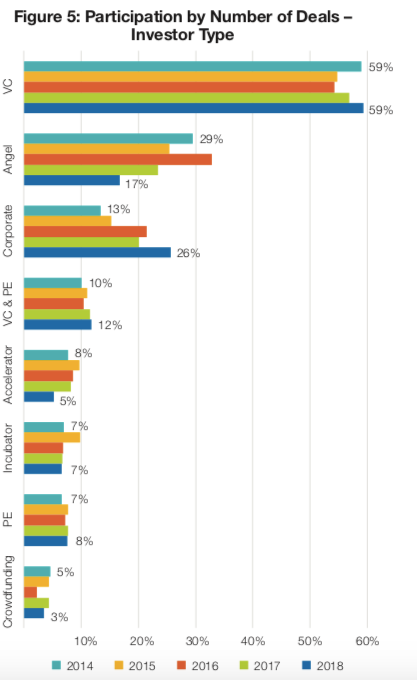 What you will learn:
1 Investments volume grew by 140% in the past 4 years
2 Who invests in Israeli startups?
2.1 Check out our value proposition for Israeli startups interested in outsourcing or hiring ad-hoc development resources.
3 What products are built and launched by Israeli startups
3.1 Top 5 startup categories by investments made in 2018:
3.1.1 Cybersecurity – $1.19 billion.
3.1.2 Healthcare – $900 million.
3.1.3 Financial services – $832 million.
3.1.4 Transportation and logistics – $753 million.
3.1.5 Agriculture and food (AgTech and FoodTech) – $196 million.
4 What technologies raise most investments in Israel
4.1 300 out of 320 international companies present in the country outsource their R&D to Israel.
5 Israel’s potential to become Blockchain Valley of the world
6 Top Israeli FinTech Startups of 2019
6.1 Colu
6.2 NsKnox
6.3 Pagaya
6.4 Rewire
6.5 Riskified
6.5.1 Are you an Israeli startup looking to future-proof your business idea with a prototype or MVP or outsource your software developmenbt project to a professional vendor offshore? Let’s discuss how we can assist!

Earlier this year, Start-Up Nation Central has published Israel’s 1st ever annual ecosystem report 2019 which offers a comprehensive overview and analysis of the state of the country’s high-tech innovation ecosystem of the past year. The Report provides global context, highlights financial and investment trends, and scrutinizes different players that constitute the entire ecosystem of Israeli startups.

As a custom software development provider with a solid footprint in Israeli high-tech market and a strong portfolio of Israeli clients including MyHeritage, Wobi, CryptoRated, Fiapay, and other startups and established brands that leverage our R&D capabilities in Ukraine, we’ve created a wrapup of the Report’s most interesting and thought-provoking trends and findings. Here you go!

Investments volume grew by 140% in the past 4 years

According to the Start-up Nation Report, Israeli high-tech companies are more popular than their American peers in terms of attention of investors: while investments in Israeli startups increased by 140% in the first four years since 2014, investments in technological startups from the U.S. only grew by 64%. In 2018, the investments volume in Israel increased by 17% compared to the previous year and reached $6 billion. The average size of the investment round is $4 million, which is 33% more than in 2017.

Landa Digital Printing turned out to be the most distinguished startup that had attracted a $300 million round of investments for the development of Nanography technology, with which it plans to create a breakthrough in digital printing.

Who invests in Israeli startups?

Of 430 investors that reside permanently in Israel and invest in local startups, 23%, or 99 companies are based outside of Israel. After the Israelis, Americans make the second largest group of early-stage investors, followed by investors from the UK, Germany, and China. When it comes to later-stage investors, Top 4 remains the same, with Germany being replaced by Japan. For the detailed breakdown, see the picture below:

As for M&As, the US companies tend to acquire Israeli startups more than anyone else: they account for half of all transactions in 2018. SalesForce is leading the way after it had acquired an Israeli startup Datorama specialized in AI advertising for $850 million.

Check out our value proposition for Israeli startups interested in outsourcing or hiring ad-hoc development resources.

By the way, in 2019, there is already a definite contender for the largest M&A deal – in March, Nvidia Corporation acquired an Israeli company Mellanox (supplier of computer networking products using InfiniBand and Ethernet technologies) for $6.9 billion.

What products are built and launched by Israeli startups

In the past years, Israelis have focused on business products: this is not surprising, given the small local market. 80% of more than 6,600 active high-tech startups build and offer B2B products. Israeli startups prefer to sell their technology to a small number of foreign companies rather than trying to bite a share of the local market or win users from abroad.

Top 5 startup categories by investments made in 2018:

Interestingly enough, although companies in this area account for only 7% of the total ecosystem, they raise the most money!

Investments in digital medicine and eHealth continue to grow, while pharma and medical device niches have declined in investments received.

This industry showed a record-breaking growth, almost twice as much as in the previous year.

Another breakthrough achieved: this vertical obtained more than twice the volume of 2017. Ride-sharing startup Gett is ahead of the curve with $80 million raised.

The most popular AgTech technologies among investors were “smart farming” and biotech. In FoodTech, startups building solutions for supply, logistics, and packaging attracted the most funding last year.

What technologies raise most investments in Israel

Artificial Intelligence (AI) has become the leading technology in all industries – 17% of all innovative startups leverage it to this or that extent. Other technologies popular among Israeli software developers include the Internet of Things and blockchain.

AI is at the heart of the Datorama technology bought by Salesforce. Also, Intel and Nvidia have decided to open their own artificial intelligence research centers in Israel, according to the latest reports in the media.

300 out of 320 international companies present in the country outsource their R&D to Israel.

Google has already released its product built and tested in the Israeli R&D center: Google Duplex, which allows the voice assistant to place orders on the phone.

In conclusion, take a look at a very interesting snapshot of Israeli investments depending on the industry and technology:

Also read how outsourcing to Ukraine helps Israeli companies lead the way in AI, blockchain, and progressive tech in general.

Israel’s potential to become Blockchain Valley of the world

According to Start-Up Nation Central Report, in 2018, there were 129 blockchain development companies in Israel, which is 17% up from 2017.

In the summer of 2017, the Israeli-Swiss cryptocurrency startup Bancor raised $153 million for its ICO in unprecedented 3 hours! It was the second largest fundraising campaign in the blockchain industry. Last year, Israelis realized that blockchain could be used far beyond the crypto world. Surprisingly, while blockchain was met with apprehension and skepticism all over the world, Israel took it as a new challenge to capitalize on.

Demand for the blockchain development expertise is so high and supply of talent is so low now that one blockchain developer has 14 open vacancies to choose from (i.e., each 14th blockchain vacancy remains unfilled). In fact, there are very few real blockchain experts, as the sector is still in its infancy. Most often, specialists from other industries come here and adapt their skills. Alternatively, Israeli startups go to the leading offshoring hubs like Ukraine for missing blockchain dev talent and R&D support.

According to another investments Report by PitchBook, in 2018, investors invested around $2,9 million in FinTech startups alone. Here’s a list of Top startups by both funds raised and innovative edge.

A digital wallet and a very promising startup, Colu offers blockchain-based management of digital currencies for local Israeli economies. Currently, Colu is a digital wallet used for payments by small businesses in the four cities in which the company operates. Users charge their digital wallet with fiat money using a credit card. Since 2015, the Tel Aviv-based startup has attracted funding each year, bringing its total raised capital to approximately $42 million. In January 2019, Colu received $7 million from Overstock.com founder and CEO Patrick Byrne.

Founded in 2015 by Alon Cohen (creator of the Israeli startup CyberArk), NsKnox is a platform for protecting corporate payments in real time. Its key mission is to protect users from cyber fraud, internal fraud, social engineering, and attempts to manipulate data throughout the payment processes. nsKnox’s innovative approach significantly strengthens corporate payment systems – this technology allows organizations to verify the authenticity of each payment, sender, and recipient, as well as to detect and prevent manipulations, ensuring continuous protection of the payment process at all transaction points, including the enterprise, bank, and supplier.

In 2019, nsKnox’s cybersecurity platform has raised $15 million in a series A funding round from M12, Viola Ventures Discount Capital and other investors.

Pagaya is an Israeli FinTech startup that attracted $25 million and $14 million in 2 separate rounds in 2016. It offers credit risk management and investment portfolio management services for large financial institutions (i.e., insurance companies, pension funds, banks, etc.). Thanks to Pagaya, it is possible to calculate the most profitable direction for investment and predict the profitability of investments in the shortest possible time. The uniqueness and efficiency of the algorithm developed by Pagaya underlie in the combination of machine learning and big data analytics. To date, the company has raised $45 million.

Another prospective Israeli FinTech startup, Rewire offers international money transfers without having a bank account. The application can be useful for foreign employees and expats who would like to send their earned money to their families in other countries. The app is now available to Israeli migrants from Sri Lanka, the Philippines, Thailand, China, India, and Russia. On March 25, 2019, Rewire closed the $12 million investment round.

Riskified is an Israeli startup that provides fraud prevention services for online transactions. According to Juniper Research, eCommerce fraud has increased dramatically in recent years and is growing faster than the entire online transaction market. It is expected to cost retailers about $130 billion over the next 5 years. Many online stores are losing 5% of their online orders because they fear illegal transactions. Riskified uses machine learning to eliminate suspicious orders and serves customers such as Samsung Electronics Co. and Swarovski International Holding AG.

Founded in 2012, Riskified attracted $64 million from investors such as Pitango Venture Capital, Qumra Capital, Genesis Partners, and Bernard Arnault’s investment company. A few days ago, the company announced that it plans to raise $200 million in the next round. The new funds will be used to fund the company’s expansion in Tel Aviv. At the same time, Riskified is considering the possibility of an initial public offering (IPO), perhaps as early as next year.

Are you an Israeli startup looking to future-proof your business idea with a prototype or MVP or outsource your software developmenbt project to a professional vendor offshore? Let’s discuss how we can assist!